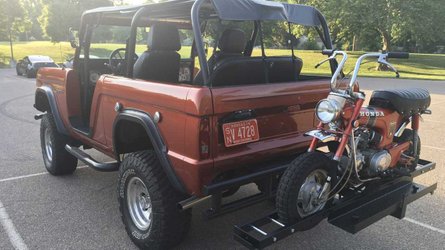 Vintage 4x4s are expensive, but what if you bought one and it came with a cool, old-school minibike thrown into the deal? Head over to Bring a Trailer, and you can buy a 1974 Ford Bronco, complete with the ultimate accessory, a Honda CT70.

It’s timely, as Ford just re-launched the Bronco, to worldwide acclaim, and Honda is bringing its new CT125 Hunter Cub to market, a modern update of the old CT minibike designs. The machines in this auction are pretty antiquated compared to the just-released versions. The ‘74 Bronco has an old-school 302ci V8, updated with aluminum intake manifold, Edelbrock air cleaner, and an aftermarket ignition system with Accel control module, Hall-effect pickup, and high-voltage coil. The truck has vintage touches like a set of Mickey Thompson alloy wheels, Duff shifter with billiard ball knob, and a bikini top (hard top included with the sale), but there are lots of other modern upgrades too, like disc brakes and power steering.

As for the CT70, the ad doesn’t say exactly what year it is, only telling us it’s an “early-1970s model powered by a 72cc single linked with a three-speed semi-automatic transmission and featuring chrome fenders and exhaust components.” Let’s face it: Nobody’s spending more than $20,000 on this setup because they want the CT70. The truck is the star of this ad.

The seller has a trailer hitch rack on the back of the Bronco, ready to haul the CT70 away for weekend camping trips in the woods or the desert. It’s a cool homage to the freewheeling outdoors lifestyle of the 1970s, when 4×4 vehicles and minibikes really gained popularity. North Americans used their four-wheeled vehicles to get to their campsites; once they were there, the kids and their parents would rip around on minibikes, with no smartphones or video games in sight. As a society, we’re never going back to those days, but if you buy this truck/minibike combo, at least you can pretend on the weekend.

Anything Motorcycle 2020. Powered by WordPress